Skip to content
Libraries and Hours Ask a Librarian

Looking for love this Valentine’s Day? Let Mann Library’s matchmaking service help you meet the book of your dreams!

From Monday, February 6 through Tuesday, February 14, we’ll be matching book lovers with a “blind date” selected from our Edith A. Ellis Collection. This collection is full of popular nonfiction titles on topics ranging from people and planet, food and fiber, town and country, home and cosmos, and much, much more!

Just fill out a short dating profile and let us do the rest! You’ll be notified by email when your match is ready and waiting to be picked up at the Mann Library Help Desk. Not feeling the vibe? That’s OK – we can take your “date” back if it’s not love at first sight!

You can also explore the Ellis Collection on your own, online at bit.ly/mann-ellis-collection or in-person on the 1st floor of Mann, near the library entrance.

You may have seen some new faces (under those masks) at the library recently, so let us introduce our newest team members who joined Mann over the past six months! 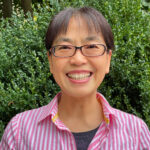 Yue joined the Mann Library team in September 2021. Prior to coming to Mann, Yue worked at Ithaca College Library as an evening and weekend supervisor, gaining experience in access services and student supervision. She has a Bachelor of Education in Physical Education from Beijing Sport University. Her other professional experiences range from supervising a team of students volunteering at the Summer Olympics in Beijing in 2008, to helping with the creation of a webpage for East Asia Scholars at the Cornell Kroch Asia Library. 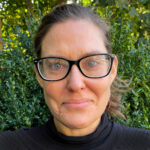 Peggy was hired as our interim Gallery & Outreach Spaces Coordinator in September 2021. She has a Masters in Landscape Architecture from Cornell, and recently worked with Ithaca Neighborhood Housing Services. As a research fellow with Syracuse University’s School of Architecture, she managed the production of a design book series and a large group exhibit focused on sustainable, affordable housing and land use for underserved populations in the Syracuse metro area. Since 2007, Peggy has also been an active partner in an Ithaca-based environmental and cultural landscape design practice. 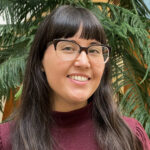 Natasha joins us from the Arnot Art Museum in Elmira, NY where she has been responsible for planning exhibits, leading accessibility and inclusive design initiatives, and building partnerships with community members and artists. Prior to working at the museum, Natasha was a special collections reference assistant and research assistant for the Syracuse University Libraries. She has MA in History of Art from Syracuse University. 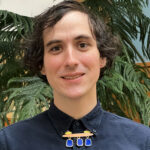 Liam comes to us from across campus where they worked at Olin Library as a Senior Circulation Assistant. Liam has worked as a teaching assistant in Cornell’s Anthropology department, a lab assistant in a Cornell Archaeology lab, a Public Program and Exhibits Coordinator for an Indiana University Archaeology Lab, and a museum educator. Liam holds an M.S. in Anthropology, and a Professional Certificate in Museum Studies from the University of Wisconsin-Milwaukee. 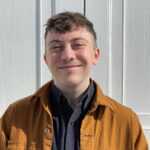 Carson served as Youth Services Librarian at the Thomas Branigan Memorial Library in Las Cruces, New Mexico and was previously the Adult Services Librarian at Benson Memorial Library in Titusville, PA. In both libraries Carson did collection development work and ensured that the collections were as diverse and inclusive as possible through data-driven diversity audits. While earning his MLIS at Clarion University of Pennsylvania, Carson gained a great deal of real-world social sciences experience while working in a psychiatric hospital. Carson has presented on LGBTQIA+ representation in collection development and has published in Library Journal.

Yay!  With the COVID/Omicron infection rate at Cornell being held at manageable levels to help ensure the safety of the vulnerable members of our community, we’ve made it back to in-person classes on campus. Well done, friends! Below, a quick update on what this means for Mann Library services and spaces.

First we’ll start off with what hasn’t changed:

So, what is different for the rest of the semester?

With the spring semester well underway, it’s time to think about building those research skills, and what better way than by exploring our wide selection of pre-recorded workshops? Visit our Workshops page for our full listing of asynchronous workshops, including help with searching and literature reviews, citation management software (Zotero, Mendeley, and EndNote), the nuts and bolts of systematic reviews, and research data management. Check out these workshops at a time and place that’s most convenient for you!

And be sure to check out our live workshops this semester, which are being offered in a hybrid format:

Mann Library has digitized and made available to the world the early 20th century magazine The Modern Farmer. Published by the National Federation of Colored Farmers (NFCF) from 1929 to 1949, this unique treasure was one of the only serial publications published in the Depression-era United States that was aimed at African-American farmers. The NFCF was an organization that formed local chapters of buying and selling distribution cooperatives for African-American farmers and their goods at a time when prevailing Jim Crow laws made such efforts dangerous. James P. Davis, The Modern Farmer’s editor and president of the NFCF, served as a Head Field Officer of the Agricultural Adjustment Administration and was also a member of President Roosevelt’s “Black Cabinet,” the group of African Americans who served as public policy advisors to the President and First Lady Eleanor Roosevelt. Mann Library’s copies of The Modern Farmer are the only known copies of this important record of 20th century history. The online collection can be found at digital.library.cornell.edu/collections/chla with a search for “Modern Farmer.”

For more information on the history of this remarkable publication, see our February “Vaults of Mann” blog.

As some in the upper campus community may have already heard: There’s a new library director in town.
In late January, Cornell University Library welcomed Sara Wright as the Interim Director of Mann Library, following the retirement of Mary Ochs ’79, who led Mann Library from 2008 until January 2020. A January 27th reception celebrated Ochs’ many achievements and contributions to the Cornell University and global scholarly community, and in one of the numerous highlight moments of the occasion, Mann’s leadership torch — well, our bouquet of ceremonial corn — passed from Ochs to Wright to mark Mann’s newest dynamic transition.

Sara Wright is no stranger to Mann Library and the mission of land-grant scholarship at Cornell. Having earned a Master’s degree in Library and Information Science from Drexel University, Wright joined Mann Library’s staff in 2011 to manage the services offered to library patrons via the Stone Computing Classroom and other public computing facilities at Mann. In the following years, Sara assumed a number of other leadership positions in the Library, including Academic Technology Librarian, Head of User Services and Engagement, and Head of Learning, Spaces and Technology. Thanks to Sara’s stewardship in these roles, Mann has seen a number of important, widely acclaimed facilities and service improvements that have greatly enhanced the library’s learning spaces with new tools, state-of-the-art technology, and dynamic furnishings to support the wide variety of research needs and styles represented among the students and researchers who learn and work at Cornell today.

Of course, new leadership at Mann Library has some big shoes to fill. As the speakers at Mary Ochs’ retirement reception on January 27 made clear, Mary leaves a strong and lasting legacy at Mann Library and wider Cornell. Her leadership has advanced some critical progress in widening the accessibility of world class collections for researchers at Cornell and the world beyond, especially in the developing world. And under Mary’s encouraging watch, Mann took on a pioneering role in exciting new areas for academic libraries, such as the development and application of methodologies for the systematic review of already published research literature to help realize stronger returns on emergent research initiatives. As Kathryn Boor, Dean of the College of Agriculture and Life Sciences, summarized, over the course of her tenure as director of Mann Library, Mary Ochs proved herself a fearless leader in the Cornell community. And it’s no secret: In a time of rapid, near-constant change for libraries in the 21st century, fearlessness is indeed an invaluable quality for effective library management.

As Interim Director, Sara Wright will bridge the time until a new director of Mann Library is formally appointed. A national search to fill the position will begin shortly. Library and University stakeholders, including faculty of the College of Agriculture and Life Sciences and the College of Human Ecology will have an opportunity to meet and provide feedback about short-listed candidates. Any questions about the process may be directed to Search Committee members Danianne Mizzy (CUL Associate University Librarian / Search Committee Chair) and Ashley Shea, (Head of Instruction Services, Mann Library). It’s anticipated that an update on the results of the search process will be available in a few months time. And in the meantime, with Sara Wright at the helm, we can all also rest assured—Mann Library remains in excellent hands.

Dig deeper into agricultural history with Mann’s Digital Collections, which were recently given a makeover and migrated to CUL’s Digital Collections Portal. The Core Historical Literature of Agriculture (CHLA) is primarily a collection of landmark agricultural texts published between the early 19th century and the late 20th century. These full-text materials cover agricultural economics, agricultural engineering, animal science, crops and their protection, food science, forestry, human nutrition, rural sociology, and soil science. With more than 2000 books and 36 journals together comprising over a million pages CHLA is one of the largest digital collections of printed works at CUL.

Also newly updated, The Hive and the Honeybee showcases selections from the E. F. Phillips Beekeeping Collection, one of the largest and most complete apiculture libraries in the world. Initially begun with just ten historically significant books in the Phillips library, the collection has since grown to include over thirty key monographs as well as the first forty volumes of the landmark publication, American Bee Journal, covering 1861 through 1900. Each volume of this growing digital collection is available in full text format and is fully searchable.

No matter the gray, cold, rainy, snow, sleet and ice outside, collective creativity will win the day inside.

For the start of the spring 2019 semester, Mann Library cordially invites our community of students, faculty and staff to help us cover the security gates at our front doors with some knitting and crocheting fun. Bring us any swatches you’ve come up with and we’ll add them to an evolving sweater that’s already starting to make our gates look cheerfully cozy against the Ithaca winter. Or, just pick up knitting needles, crochet hook and yarn at the station we’ve set up inside our doors to start working on your patch right here in the Library. (Life sciences and human ecology motifs particularly welcome!)

Don’t know how to knit or crochet? No problem! Here are three ways we can help you get into the yarn-bombing knitting groove fast:

We’ll be celebrating the final installation with free hot cocoa in the Mann Library lobby on Friday, February 8, 11:00 a.m. – 1:00 p.m., generously donated by Manndible Café. We’ll also be featuring a fire sale of our new Mann Library mugs to kick off our “Reduce, Reuse & Recycle” campaign @ Mann for the rest of the spring semester. Mugs will be on sale for $5 a piece on this day only–be sure to drop by and get yours so you too can GO REUSABLE!

Have a question? Contact us at mann-public-ed-prog@cornell.edu, and one way or the other do come join us for some yarn-bombing fun!